Get your Portal guns ready people, Valve's Portal 2 released yesterday. Is it better than the original? Lets find out. Don't worry either, no spoliers ahead. Don't forget about the Midweek Madness sale either! 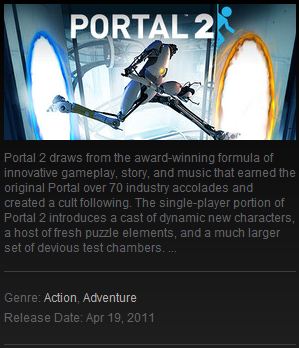 God lord how the time passes so fast. Just 4 years ago we were amazed by what Valve did with the orginal Portal. Up to that point I don't think there was ever a first person puzzle game. To say that they blew us away would be an understatement. From the voice of GLaDoS to the nature of the puzzles that were thrown our way, Valve made a whole new genre of game. This time things really haven't changed. Sure, there are still levels that you need to complete and obsticles that need to be conquered but in whole its much of the same game with some new mechanics thrown in. Don't worry, it's not a bad thing at all. In fact, I think its what every gamer out there wanted.

The look and feel of the game has changed. The Enrichment Center is now falling apart. And this is very prevalant in the game. Panels aren't were they are supposed to be. Tiles are missing on the floor. Grass and weeds are coming through the cracks. It looks old and rusted to a point. The gravity works just the same as in the first game. You go in one portal you come out the other. If you are falling you gain speed as you pass through them. There are new items to deal with also but I don't want to spoil them. Lets just say that they make the game more interesting.

The Source Engine is back to work in Portal 2. This is the most versitile engine in all of gaming. The Unreal Engine does come close but this is so old and it still looks wonderful. Kinda weird how Valve can get it so right and others get it so wrong. Like other Valve titles this isn't going to smash you computer. Even on low end hardware you are going to have a great experience. I am playing on the main rig and its pulling 200fps with everything on High and a resolution of 5980x1080. It's also good to see that Portal 2 didn't give me any complaints when I set it to that resolution. Some games will do some crazy things. Like, move desktop shortcuts around and move windows to different monitors. Not many people have three monitors but for those of us that do you won't have to jump through hoops to make it work.

Other things to notice in Portal 2 is the sound. The voice over work is some of the best in video games. GLaDOS is a trip just like in the first game. There is more to say on this front but I think it would be a bit of a spolier so i'll leave it alone. The ambient sound in the game is also great. It's not so much a Jeopardy music but it does make you think better without becoming annoying.

Without a doubt there is so much to do, see and hear in Portal 2 that it's going to take a couple of play throughs just to see it all. If you are even thinking about buying it, do it. You will not be dissapointed. Its very hard for me to laugh out loud at video games but I can already remember a couple of times of doing so. This is where Valve really shines. In making games that draw their audience in and keep them entertained througout the game. Portal 2 is great in small bites. That is the way that I played the first and how i'm doing the second. Take it one chamber at a time.

Either way you do it, by all means, enjoy your playthrough. I will talk about it more in coming weeks after more of our community has played it. 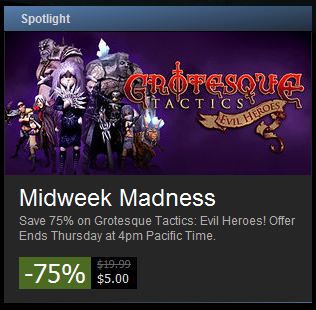 I would like to thank the entire LanOC community for a great LAN. I hope everyone had as much fun as I did. Thanks again for everyone coming out. Look for a picture post this coming week. The staff is working hard at getting some videos and pictures up. We took some great shots! Thanks again everyone and we'll see you at LanOC V9.0

Well i'm gonna get back to playing Portal 2. I still haven't finished it yet. In the meantime, have fun with whatever your doing this week. Wingless is OUT!!!

Wingless92 replied the topic: #15271 21 Apr 2011 00:11
Looks like users are getting pissed off with Portal 2 now, saying that it's a console port? Yea, um, I don't see it over here. Head on over to metacritic to see all the BS that people are throwing around. One of the big complaints is that it says "Don't Turn Off Console" while saving. I have never seen that and I have been through more saves that I care to share.

I think the whole "Console Port" mentality has been way overblown. That's me though. One this is for sure. Stuff gets blown way out of proportion on the internet.

I'll talk more about it in the coming weeks when more people have finished it.

Leonresevil2 replied the topic: #15295 21 Apr 2011 19:16
Please spoiler up when you talk about it in the future; you haven't revealed too much but I probably won't get it for awhile. I know it's a great game, but the potato sack messed up my games and bandwidth for awhile, and I've spent a lot of money on games on Steam. Despite being a wonderful game, I'm in no rush to get it right now.

Leonresevil2 wrote: Please spoiler up when you talk about it in the future

All the stuff that I did talk about are not spoilers. Like I said in gaming news. There are no spoilers that I talked about. Didn't wanna ruin it for everyone else.

Leonresevil2 wrote: Please spoiler up when you talk about it in the future

All the stuff that I did talk about are not spoilers. Like I said in gaming news. There are no spoilers that I talked about. Didn't wanna ruin it for everyone else.

I know, I've just avoided everything about the storyline possible, even not watching the videos. I've already learned too much on stuff from the ARG. It's probably unnecessary on my part, but I have kept pretty clear of the story so far.

Wingless92 replied the topic: #15311 22 Apr 2011 00:14
Yea, none of the stuff that was in gaming news was spolierish in any way. I would never do that anyways. Storylines and such for this type of game are off limits.

Dreyvas replied the topic: #15316 22 Apr 2011 01:58
Wingless, I think you underestimate the vigor with which some people like to avoid any possible information about a game before playing.

Dreyvas wrote: Wingless, I think you underestimate the vigor with which some people like to avoid any possible information about a game before playing.

You have a portal gun, your in a room, there is sound = Portal 2. Too much?

Should of used that for my preview, LMAO.

I hope everyone laughs at this cause I did.

Regardless, it's a great game. In the coming weeks i'll be sure and put up SPOILER alerts when I do post something.

I agree though Dreyvas, some people do not wanna know anything about the game and I support that. I'm the same way with movies. I watch one trailer and that's it.

Dreyvas replied the topic: #15327 22 Apr 2011 13:16
I think the thing that drives me nuts the most is when you're watching TV and at the end of a show they play a trailer for the next episode, showing every scene that might be even vaguely interesting. Ugh.

Dreyvas wrote: I think the thing that drives me nuts the most is when you're watching TV and at the end of an show they play a trailer for the next episode, showing every scene that might be even vaguely interesting. Ugh.

In example: The Event

We have 643 guests and one member online