Call Of Duty: Black Ops First Strike DLC hit on Friday along with Sanctum an FPS tower defense game. Its your weekly gaming news update.
I'm going to say this right off the bat. The last two weeks have been pretty crazy with Homefront and Crysis 2 coming out. From now on i'm not going to do so much as a review but previews. I'll let you make your own decisions about games.  Moving on.

So for those of you that have been sleeping under a rock, First Strike is out now. For $15 of your hard earned Space Bucks gets you four multiplayer maps and one zombie map. Head on over to Steam to queue up the download. Join our community on Wednesday and Fridays for LanOC gaming nights. We have our BLoPs server running the DLC maps 24/7. 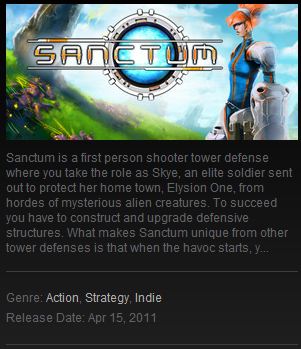 Sanctum is a crazy if I have ever seen one idea. Lets mix a tower defense game with an first person shooter. As many can attest to I am a huge fan of Defense Grid. I have over 20 hours in that game and it keeps drawing my back in. I fired up the game and got my settings right. I played the first level and got smashed, it wasn't even close. Looks like this is going to take some time to figure out. Seems like the learning curve is much higher than Defense Grid. Going to keep playing over the next couple of weeks and i'll see how it goes.

I know that it was short this week but Steam isn't running a midweek madness sale and I haven't finished Crysis 2.

Until next week, stay frosty LanOC. Wingless is out!