Wednesday is here and Crysis 2 is out. Will it destroy your computer like Metro 2033? Does it play like the original? What about the Steam Midweek Madness sales? Lego Star Wars III: The Clone Wars and Post Apocalyptic Mayhem are also featured topics this week. LanOC Gaming News starts now!
Midweek Madness Sale: 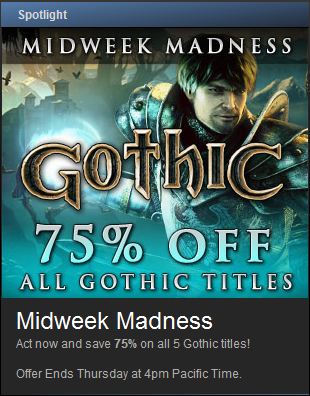 If you are one of those gamers that likes the Gothic games, now is a great time to add them or the ones that you don't have to your Steam library. Get all of them for 75% off until 7pm EST Thursday. Make sure to pick them up soon. They don't call it Midweek Madness for nothing. 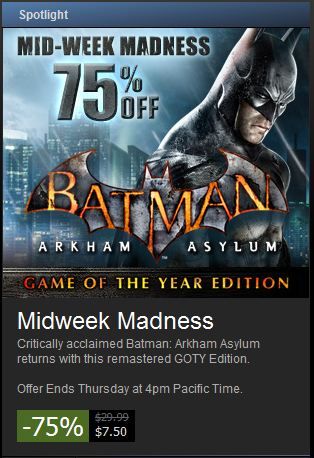 If you don't have this game yet, what have you been waiting for? With dedicated PhysX processing and great graphics this is a no brainer for $7.50. If you want to sit back and take out some anger this is a great brawler. Beating the crap out of Jokers minions is a great way to waste an afternoon. 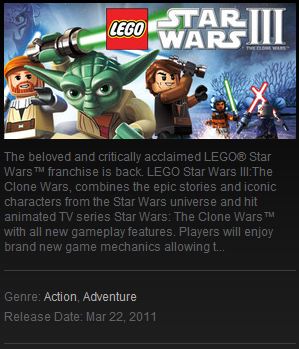 Lego Star Wars III: The Clone Wars released today. If this is anything like the other Lego games this is a must buy. The Lego games hold that special place in my gaming heart. They are just so cute and fun to waste time on. With no real penalty for death there is very little pressure. It's what gaming is all about. Sit back, relax and just have fun defeating enemies with cool guns/light sabers. With those always present "Ohhhhh's" and "Hmmm's",these voice's are what the games are known for. Pick it up now on Steam for $29.99. 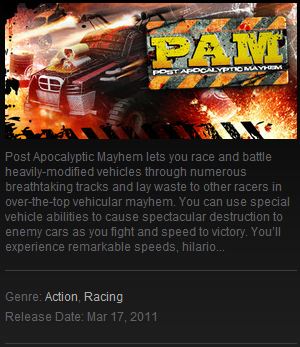 I have always been a fan of the Twisted Metal and Motorstorm games on the Playstation. PAM is one of those games that takes them and puts them in a blender. The end result? PAM. It's stupid hard to control with anything other than a controller but most racing games are not meant for mouse and keyboard. The racing in the game is spot on. The controls are precise and you feel like you are really driving something big or something small. The weapons do some pretty crazy damage. Overall it just a cheap game to pick up and mess around with. If you want to get in on some PAM, head over to the Steam page and download it now. It is on sale right now for $7.99. 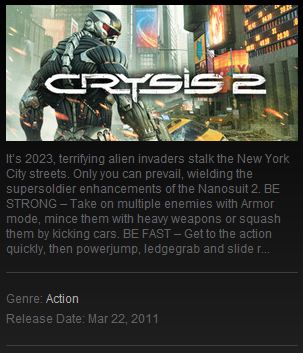 So we all know about Crysis and the follow up Crysis Warhead. The mad sciencetists over at Crytek pushed the PC graphics to a whole new level when the original shipped. Gamers everwhere started to cry as their systems overheated for being overclocked to the moon. Many people built systems just to see how good Crysis could run. Thankfully we are past those times, kind of. With games like Metro 2033 being the new Crysis we are back into the graphics rage. Remember the Xbox 360 and Playstation 3 are getting quite a bit old now. With GPU's moving rapidly like they do in the PC market it's easy enough today to build a system today that performes admrilably. You don't need to have the fastest computer out there to really enjoy gaming. 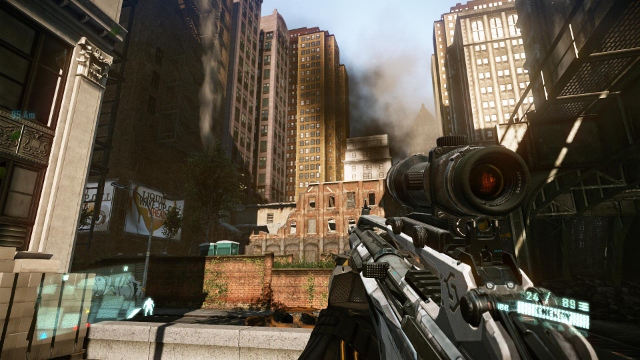 I played Crysis 2 on my main rig which is a i7 920 OC'd to 3.2Ghz, 6gb RAM and two GTX 580's in SLi. I played at 1920x1080 resolution with all settings on Max. As you can see by the screen shot above the game looks great. The lighting, just like Homefront is awe inspiring. The way the shadows work and how the light hits different surfaces really lets you see where CryEngine3 shines. I was impressed that the framerate hovered right around 80fps no matter what was going on. Overall my rig handled it perfectly. I really want to try it on the machine that I played Homefront on and see how it does with it. You may have to mess around with some of your graphical settings but you should have no problem running Crysis 2 on older hardware. You may not be at Max settings but it will still look spectacular. 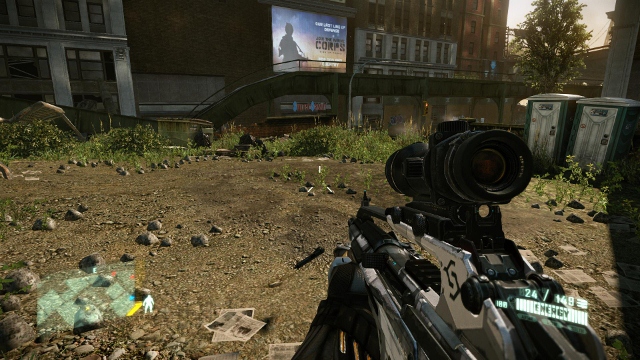 In this screenshot I was looking to make an emphisis on the textures. Looking at the ground you can see how the rocks aren't on the ground, there in the ground sticking up. Remember, I was playing on Max so your results may vary.

After listening to a brief story about how New York City is under a epidemic from an alien infestation you really start to see how long Crytek spent on the game. The Nanosuit reacts to bullets or the stresses that you put on it is very different than in the first two games. I would like to get into the story more but I'm just not that far and I don't want to spoil anything for people that are looking forward to it. 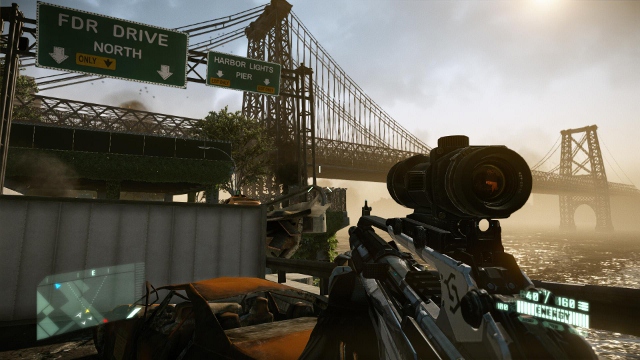 All I can say is right now i'm on the FDR trying to get to Gould's Lab to pick him up. I have been fighting with what seems to be people hell bent on killing me. There is also something that is really strange. I have run into some of these NPC's that have the same voice as your captain in the first game. Kinda weird to put him on the bad side but it does ring a bell in your head when you hear him. Once I finish the game I'll give more background on the story. I have just been way to tired today to push through an entire game. So I thought that I would post my intial opinions of the game. So far? So good. It runs well and the story is interesting, just need to put more time into it. Other than that, the graphics are about what I expected from Crytek, nothing but the best. 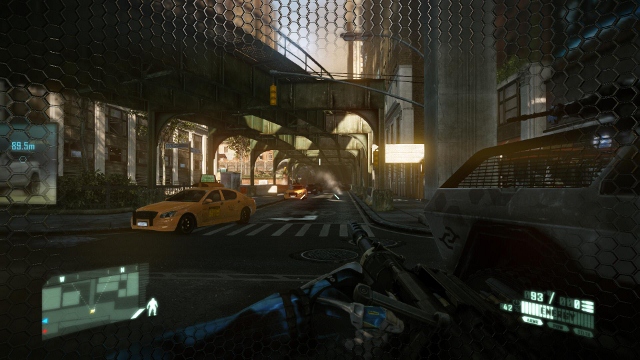 The new Nanosuit is a bit different, as you can see in the picture above. No longer do you have to use the middle mouse button. Now you can use Q for "Maximum Armor" and E for "Cloak Engaged". Now, the defult setting is off rather than "Maximum Armor." Running, jumping, armor and cloaking take away from your energy bar in the lower right hand corner. Once the meter is drained you will have to take cover. The meter does build back up over time, so stay in cover until its full. Also new is the ability to upgrade your suit. There are 4 tiers with 3 upgrades for each tier. I have just begun to upgrade mine but it seems that you are only going to max out one tree and not all of them. I guess we will have to see.


We will see you next week. May all your games be bountiful and frugal. Wingless is out!

Enjoy some more Crysis 2 Screenshots below 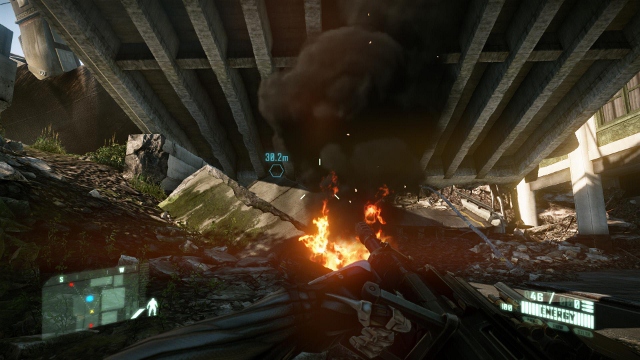 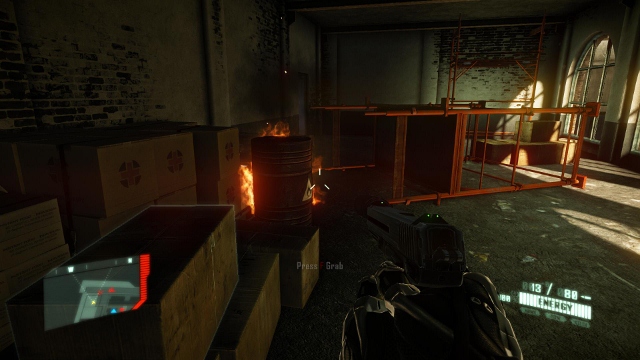 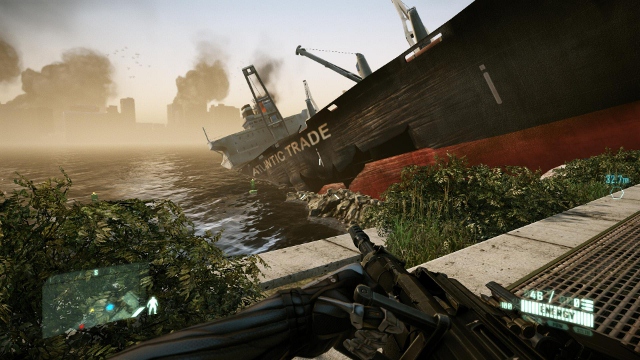 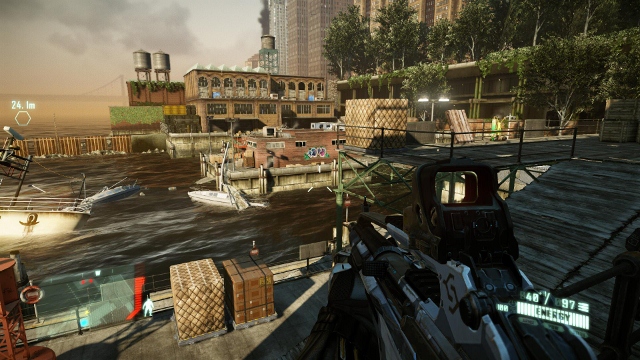 draymac replied the topic: #14468 23 Mar 2011 20:42
Very good entry this week sir. I like the informative feel versus an opinionated feel you get with other news outlets. Thanks for your time putting this together!

Lersar wrote: 1130+ views just on the post alone, you're definitely catching some eyes.

LOL! I'm not sayin' anything.

We have 695 guests and one member online