Sorry I haven’t been writing. Getting back into the swing of things after CES and school starting again, it’s been crazy busy, on with the news.

We PC gamers are always looking for great games to play at our LAN party’s. One of the biggest determining factors is LAN play. When StarCraft 2 came out people were disappointed that it didn’t have LAN play. I guess that we just deal with it. Watching the MLG tourney a couple of months ago it was funny to watch the network go down and hold up the tournament. Monday Night Combat doesn’t have this limitation. I know that people might be short on cash right now cause of the holidays. I urge you to take a look at MNC. When the game first came out many people thought that it was just another TF2 clone. After putting over three hours in it I can say that it’s not. Think of TF2 with a mix of League of Legends/DoTA. Enemy bots are always spawning and trying to make it to your base. Some of the bots are easy to take down, some not so much. The classes are all pretty equal with my own personal opinion that the Assassin class is way overpowered, having a class that does one hit kills is overpowered for my taste. Like any great game that announcer has to be spot on, “Hey Ohhhh” and this one is. The best announcer in any game period is from Unreal Tournament. I can hear it now, “Killing Spree”. Not only is the announcer cocky in a funny way he also gives you good tips throughout the game. The guns in the game or weapons all feel really good, kind of like in the Call of Duty games. I have been playing mostly the Assault character. This is the most well rounded character in the lineup.  He has an assault rifle with quick reloads that does quite a bit of damage. The second weapon is a grenade launcher. This can do some serious damage if you place your shot correctly. The grenades bounce so you’ll have to take that into account.  For a game that supports LAN and dedicated servers this might just become our new LAN game. I urge everyone to head over to Steam and download it now. At $15 it’s one hell of a deal. 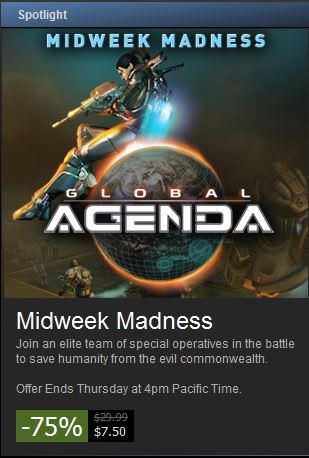 Global Agenda is on sale until 7pm EST. I bought this after a friend recommended it to me. Was I in for a surprise. This isn’t the best shooter or the best MMO, but it is the best MMO Shooter! I talked a little bit about this game last time in Gaming News but I still have been super busy with other games and school. I need to put more time in it than what I already have. From what I have played so far it has good gun feel and the leveling up feels like your actually accomplishing something.  Once I get some more game time in i’ll post a full review. For $7.50 just go ahead and buy it. I know Lesar also picked this up along with D-RAYMAC and Technobear. I might add that there is no monthly subscription to Global Agenda. That is what made me buy the game. If you want to shoot people in an MMO then this is your game. 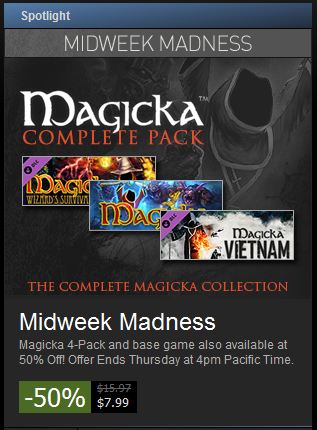 Another small indie game came out this week called Magicka. The people over at Arrowhead Game Studios have really done a great job. Again, I haven’t spent a lot of time with this game but a couple of LanOC member have picked it up. The game had a couple of problems at launch but the dev’s have been throwing out updates about every day. For $10 I would call it a good time waster. It also has Co-Op and Multiplayer and for those of you that need controller support it has that too.

I hope everyone enjoyed our CES 2011 coverage. All of the reviewers had a great time out in Las Vegas. Until next week, Wingless out!
Author Bio
Author: Wingless92
Discuss this article
Log in to comment
Posts in discussion: LanOC Gaming News 2/2/2011

Now if I could just put Minecraft away just long enough to do anything else......
Read More...

We have 709 guests and one member online