Nicholas Depalmer - An interview with a Pro Gamer 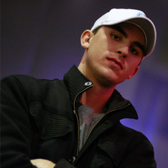 When given the chance to interview Nicholas Depalmer a professional gamer from Team Pandemic we jumped at the chance. Considering how many people play games and how few manage to find a way to make a living from it I thought it would be interesting to see how he did it. It turns out his back story was very interesting. If you would like to read even more about Nicholas you can also check out his website at propeekay.com.

Hello Nicolas my name is Wes Compton it is nice to meet you.

Hello Wes, great to meet you too.

To jump right into things; for the past few years you have been playing games professionally. How did you get into that position? I have been playing video games professionally for over 5 years; however, during the past 2 years I really made some strides with my career. While owning my brand in 2007, Flow Gaming, I traveled to a tournament in Anaheim, California to help coach my team. While there I decided to compete, for the fun of it, in a FIFA Soccer tournament – I wound up winning the tournament by defeating a past World Cyber Games USA champion “Novusnaim” earning  a qualification spot in the Championship Gaming Series Combine held at Fox Studios in Los Angeles, CA. At the qualifier I placed 5th and was drafted in the 5th round by the Carolina Core at the Playboy Mansion on live global television; as a drafted player I would receive a 30K salary. From here I gradually got better at my game finishing 2nd overall with my team in North America earning a 25,000 dollar prize bonus.  Top two teams from North America earned bids to the World Finals where we (Carolina Core) again placed 2nd this time earning 150,000 dollar prize bonus.

On the team Pandemic website it says that you have earned $205,000. Would you consider that to be a good couple of years? In all with my team we earned 205,000 dollars. The Championship Gaming Series has the best prize payouts and cash flow in gaming history to my knowledge. I believe this would be an amazing two-year period for any gamer. I can only name a few who have earned more such as Fatal1ty and Moon.

Before you were bringing in money through gaming, what kind of jobs did you hold? Any burger flipping stories? In the past I had worked at a local BestBuy, Staples and Home Depot for very short stints. Until now, I have not had a “real job” since freshmen year of college.  I was taught a saying while visiting my new found friends in Atlanta back in high school and that was to “let the money work for you, don’t work for the money.” I have learned from many entrepreneur’s that if you can “think outside of the box” and come up with ideas you don’t always have to sell yourself short and settle for something you are not happy with. I would always find ways to support myself whether it was buying and selling things on EBAY or repairing friends’ computers during slow times.

I heard a rumor from a mutual friend of mine and yours that you went to collage to get high speed internet, care to fill us in on that story? There were two things that gave me the motivation to attend college and those were to play Basketball and have high speed internet. Where I lived in Maine I had to play games with dial-up connections which made it very difficult to practice and play with the best players in the world. During school breaks when students were not allowed to be on campus and supposed to be at home I was known to hideout in my room for weeks at a time while the campus was deserted.

When you were in high school and college you played a lot of sports, was it difficult to fit gaming in with all of the other activities? No because gaming was my priority and my coaches knew it. Sometimes this would affect my playing time and my athletic potential was very high – I could be overseas playing basketball right now if I had focused all my energy to that. Sometimes I would have to work with gaming teammates to fit in time around my game schedules and with my teachers to help accommodate my traveling for gaming venues.

Being a Jock and a Gamer, did that cause conflicts with friendships in school? I really didn’t have too many “close” friends in college because I really didn’t spend a lot of quality time with anyone. I remember team bonding and campus activities that were almost nightly but I would never go; instead, I was always in my dorm room playing games. Because of being anti-social there were tons of people who knew of me and liked me as a person but I really didn’t have friends to turn to when I needed them.

Winning all of that hardware in tournaments must be great. What kind of rig are you running right now? Right now I have 3 computers and my gaming machine is outfitted with mostly hardware I won while at events and earned through sponsors. I am sporting a Thermaltake LANboy case and power supply right now with 4 gigabytes of ADATA memory and a terabyte of storage space. I prefer and use an Intel Core2duo processor and Zogis Nvidia 9800GTX video card. For a monitor I typically use my Benq projector and aim it towards a white wall in my room.

What are some of your all time favorite games? Fifa Soccer, Counter-Strike Source & 1.6, Halo3, Call of Duty 4 and Guitar Hero

How do you think the gaming community has changed in the time that you have been involved? I think the gaming community has made it more into mainstream media now so there is a definitive divide between casual and professional gamers. Prizes have tremendously increased as has the overall global coverage of events – I think one problem is that some of the tournaments and leagues are not as prestige as they have been in the past where you not only worry about going to compete for prizes but for pride.

What keeps you motivated to play videogames for a career? I have learned over the years that video games have helped me through life’s struggles and that they are an important piece of my life. I have decided to embrace my experiences rather than hide from them and, no matter what the outcome, learn from the past and make personal changes to better my future potential. My motivation is to prove skeptics wrong and show people that you control your fate in this industry.

Considering your love for gaming, does it ever get boring? I would never say that playing games really gets boring but rather it gets tedious at times. When you have to practice the same move or strategy for an hour to learn the muscle memory or thought process for that specific technique or instance it gets rather repetitive. When you are doing something that you have a passion for and love it should never get boring.

I hear you work at Razer, one of my favorite company's, is there anything interesting you can tell us about them? I have had a great relationship with the President of Razer, Robert Krakoff, for many years now and he has always offered to give me a chance to contribute in some way to the company. I am very happy that I made the move to California for work with Razer and can proudly say that they truly stand by their slogan “for gamers, by gamers.” During lunch breaks we sometimes even have competitions amongst other staff members on various platforms – some of the guys get really excited and it’s surreal.

Before we go, what would you say to an aspiring gamer now that you have become a professional gamer? Would you suggest they try to do the same? Any advice? I would like to say to anyone who wants to become a professional gamer to make sure that they stay focused and take practice as serious as possible. I think more professionals would be great and highly recommend potential candidates to try and stay social, live healthy and have a well balanced diet - time management is vital to their success. Another thing I have learned in the gaming industry is to not burn bridges with people and stay as genuine with gamers you may interact with on the internet as you would with a face to face setting.

Thanks again Nicholas for taking them time to answer a few questions. If anyone has any questions that we missed please email us at reviews a t lanoc d o t org and we will see if we can have them answered. A big thanks to Tania from Razer for putting together this interview!

You might call him obsessed or just a hardcore geek. Wes's obsession with gaming hardware and gadgets isn't anything new, he could be found taking things apart even as a child. When not poking around in PC's he can be found playing League of Legends, Awesomenauts, or Civilization 5 or watching a wide variety of TV shows and Movies. A car guy at heart, the same things that draw him into tweaking cars apply when building good looking fast computers. If you are interested in writing for Wes here at LanOC you can reach out to him directly using our contact form.
Discuss this article
Log in to comment
Posts in discussion: Nicholas Depalmer - An interview with a Pro Gamer

We have 1325 guests and one member online