My first meeting of the week was with a company called ioSafe. IoSafe designs and manufactures disaster proof storage solutions. They aren't new to the scene having been around for the past 4 years with a focus on business grade products. This year at CES they are introducing a new line of personal products for the average consumer.  With the promise of 1500 degree flames and 10,000 gallons of water to try to kill a hard drive I signed up with some excitement. I scheduled my meeting with ioSafe in the evening to get the chaos of CES started. For some reason they wouldn't allow ioSafe to do their torture tests in the convention center so they rented out a house just off of the strip. I was picked up in a nice Limo directly from our hotel and driven out to their house. On the way there I had a lot of time to talk shop about ioSafe's decision to jump into the personal market with their "Solo" model, along with more details on how they where able to keep the hard drive cool while it's running but protecting it from fire and water any other time. 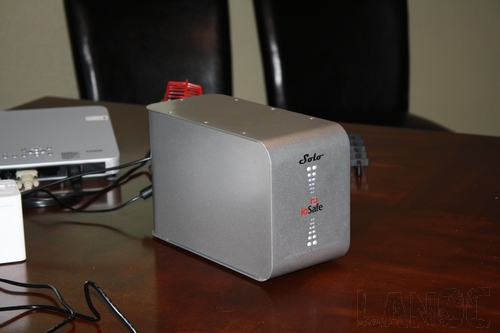 The basic breakdown on how this technology works starting from the inside out is this. Starting with a Seagate or Western Digital drive they have it wrapped in a bag that they call the HydroSafe layer, that is non-electrically conductive. This same bag can conduct heat so that the hard drive doesn't cook before it's even in a fire. In order to keep that temperature down they also include what looked to be a 60mm fan inside to push air over the air drive. Now I'm sure you are wondering how they manage to get air into the enclosure without fire getting in right.  I know I was. You could have fire sensing solenoids to close when a fire starts, or some other exotic solution. In order to product a mainstream product with a price in line with all of the other external hard drives out there ioSafe had to design something elegantly simple. What they came up with they call FloSafe Technology. With 4 vents going to the hard drive for airflow they place a small tube that when everything heats up it just melts enough to close off the vents. 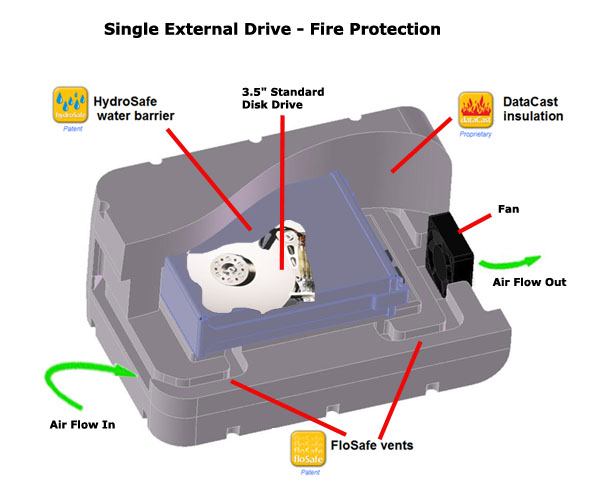 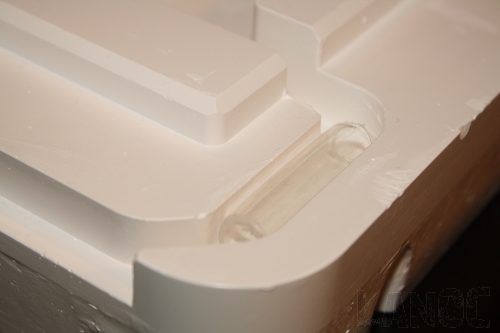 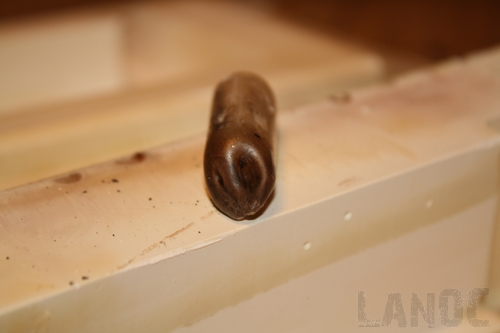 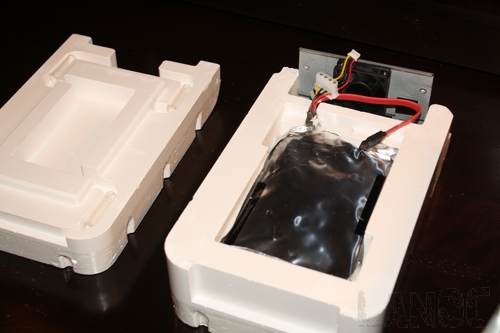 What a better way to show off the Solo's HydroSafe protection than to throw it into a swimming pool. Of course even with the HydroSafe protection you can't run the hard drive while it is submerged, the electronics inside the enclosure other than the hard drive are not protected. Bu without it running you can leave it submerged for 3 days without any worries of loosing your data. 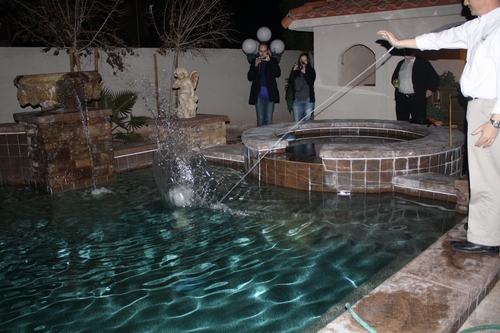 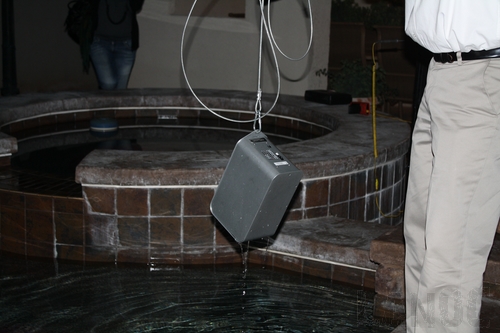 In order to dry everything off they tossed the enclosure into their fire pit to heat things up a little it. To show what happens without their protection they placed a unprotected hard drive in with it. After an amazing fire show and some nasty smelling smoke from the unprotected drive I was amazed anything could survive. 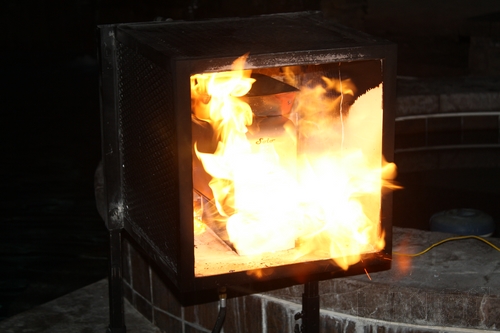 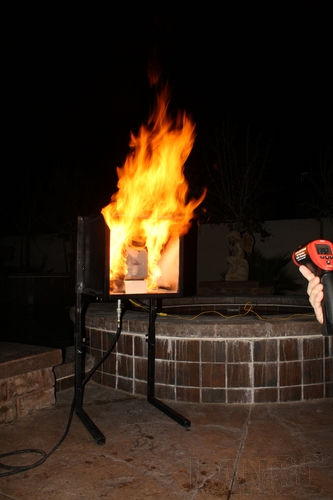 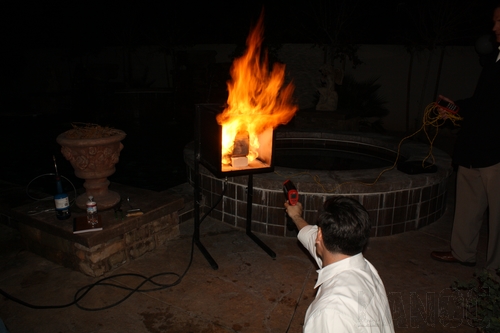 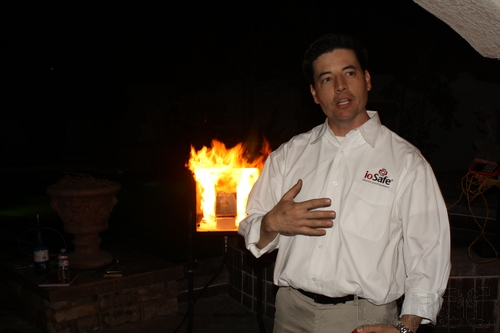 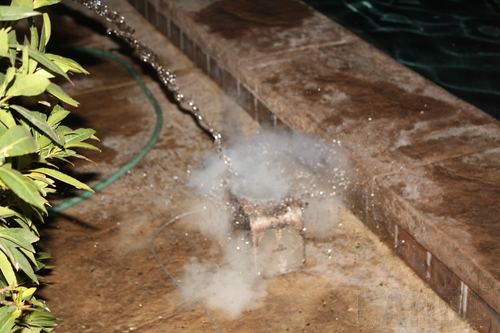 After some time to cool down they disassembled the enclosure showing off an untouched hard drive. As you can see from the pictures the unprotected drive didn't fair so well. Next we went back inside to see if the data that we added to the drive was still there and usable. After a few seconds the hard drive was recognized and our photos where safe and sound. 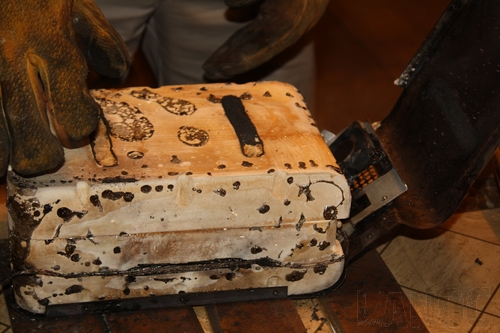 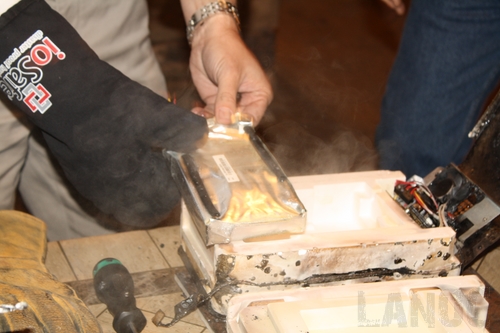 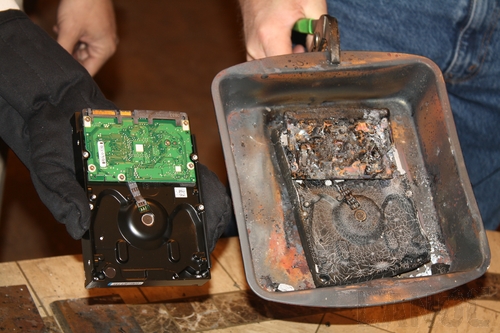 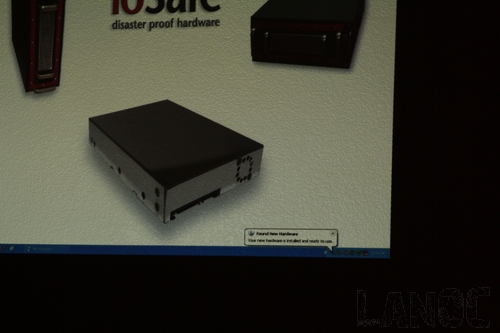 With that amazing show I expected a price of no less than 250 for the 500 gig model and going up from there. I was shocked when I found out that you could pick one up for 149.99 for the 500 gig model, 199.99 for 1Tb, and 249,99 for the 1.5 Tb. Those prices are very close to normal retail prices for other enclosures. Most people unfortunately not even think about the safety of their data. With the rise in digital camera use along with all of the other important data it's important to protect it from anything possible. Off site data storage is a good option but without great bandwidth you will experience problems trying to upload large files. IoSafe has produced a product that will make it easy for everyone to protect their important data from fires and floods. And with a reasonable price I think they are going to do very well in the future! 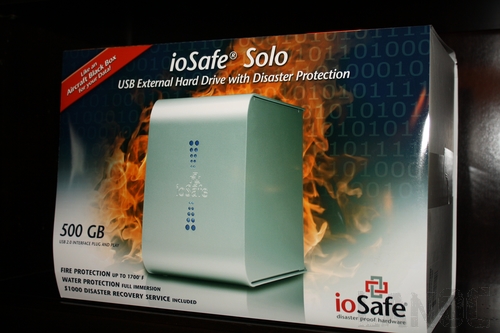 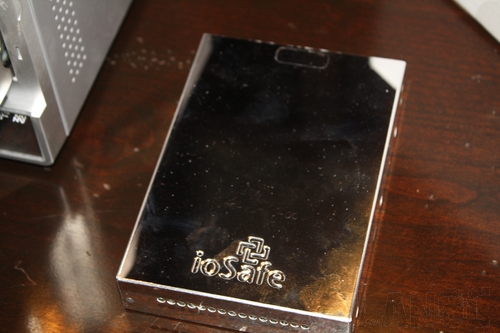 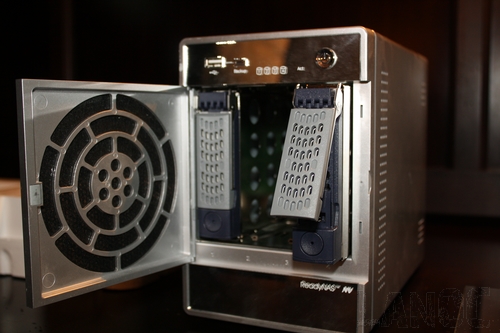 You might call him obsessed or just a hardcore geek. Wes's obsession with gaming hardware and gadgets isn't anything new, he could be found taking things apart even as a child. When not poking around in PC's he can be found playing League of Legends, Awesomenauts, or Civilization 5 or watching a wide variety of TV shows and Movies. A car guy at heart, the same things that draw him into tweaking cars apply when building good looking fast computers. If you are interested in writing for Wes here at LanOC you can reach out to him directly using our contact form.
Discuss this article
Log in to comment
Posts in discussion: ioSafe starts CES on fire