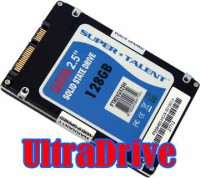 "Performance enthusiasts have been keeping notes on SSD technology for a while now, and until recently the price and performance of Solid State Drives were not within reach for casual consumers. SSD products are quickly moving mainstream, and former marketing points like power consumption is now the least impressive of all benefits a Solid State Drive delivers. The real payoff is in the practically instant response time and high-performance throughput. Capacity and stuttering were once the only problems keeping SSDs from replacing HDDs, but now it's just capacity. Quick to solve that problem, Super Talent now offers their 512GB MasterDrive RX SSD which provides capacity matched to performance.

The Super Talent UltraDrive ME adds 64MB of Elpida DRAM to the buffer has permanently solved stuttering problems, making raw performance the last bottleneck. An Indilinx 'Barefoot' internal controller commands the bank of Samsung K9HCG08U1M DRAM modules, allowing the UltraDrive ME SSD to offer an impressive capacity with top-speed performance. Benchmark Reviews tests the reaction time and bandwidth performance for the FTM28GX25H 120GB model against over two dozen other products in this article."