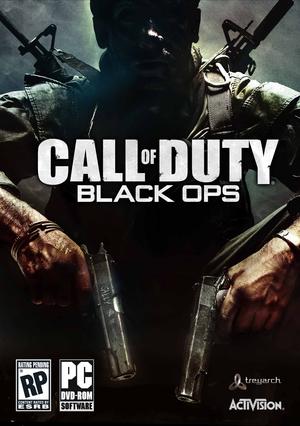 So we all know about the Call Of Duty series. We have been playing them for awhile now. The are the games that we all have fun with at LanOC LAN's and we play them online together. Black Ops is no different, we are back to dedicated servers which were missing in COD: MW2. Gamerserver's is the hosting company for the servers and you can join the LanOC community on our 18 slot Ranked server at LanOC Reviews. That is the name you need to search for in the server browser.

So with the launch of Black Ops last Tuesday we started hearing reports of massive problems on the PC version. First off, there was a lag issue that seems to be fixed somewhat. Here is a video that I shot while in-game the first day. The game was unplayable at this time. The forums around the internet went up in flames. People were ready to throw the towel in and call it a day.

There was also a problem with the server browser. Servers weren't showing up and and trying to add the server to your favorites list didn't work either. Gameservers.com came out and said that they back end was getting hammered with all the new players. They upgraded their servers and all seems to be running fine, NOT!

As the last week wore on more and more of our community started playing online and keep running into the same problems. Getting into our server after we added it to our favorites list most of the time doesn't work. Another problem that I have been having is when I click on Ranked Match and takes me a couple of try's to get into a match. Why in the world would the game try and connect me to a game that is already full? When I click on Ranked Match I want to transported to a game that is ready to go, not one that is already full. There is still a problem with the server browser not showing all of the servers that are live. Over the weekend I was at a LAN and was having a terrible time trying to join any server that was listed. Also, searching for the LanOC server didn't come up with any results. Whatever is happening over at Gameservers.com they need to get it figured out and fast. The game has been out for a week and the issue's with the server browser and ranked matches are still not resolved.

The issue with the lag has been better but the game is not where it should be. The system I play on is an i7 920, 6gb RAM and two GTX 480's in SLi. This setup should max out the 91 framerate cap that the developers put in the Call Of Duty games. For some reason, the framerate likes to drop every once in awhile. I know that other members of our community are having similar issues with the game. This of should of never happened. It's almost as if their Q&A department didn't even test the game. Atleast they patched the game a couple of days later but it didn't solve all of the problems that we are having. Hopefully Treyarch will keep supporting us PC gamers and make the right decisions. No one wants to play a game with loads of bugs and issues with performance.

I would like to talk about the single player aspect of the game but I am three missions in and just haven't put the time in yet. I was running into the same framerate/lag issues in the single player. I don't want to play the game until it's "Finished". I will be reporting on this game more over the coming weeks as patches are released and I can actually play the campaign with no issues.

I am still getting through the Goldeneye single player on Wii. I am not sure why, but I am having some great experiences with this game. I guess that the games nostalgia really appeals to me. I will report my final thoughts on this game next week when I finish it. I still haven't put a significant amount of time playing the multiplayer. I really don't see myself going back to it. Sure, it is fun but with no voice chat, I bought the game more for local co-op and single player. I will let you know how the game turns out, don't worry no spoilers here. 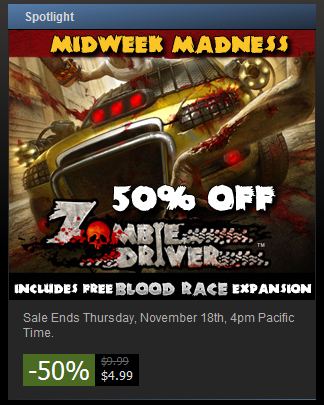 Zombie Driver is Steam's Midweek Madness game for this week. Who doesn't like mowing down zombies in cars with crazy guns and flamethrowers? If you want to check it out head over to your Steam client or click this link and queue it up for download. Don't be late either on this deal. Like all Midweek Madness sale's it ends on Thursday at 7pm EST. Get your zombie killing on with Zombie Driver!

Another LanOC Gaming News week is in the bag. Hopefully I didn't crush your expectations on Call Of Duty: Black Ops. For those of you still on the fence, I would wait a couple more weeks to let more patches come out. Then again, if you want to play with our Staff, Black Ops is what we are all playing. Until next week, this is Wingless92, your weekly Gaming News writer signing off.
The following user(s) said Thank You: Lersar

Less More
19 Nov 2010 01:22 #12436 by J_E_R_O_M_E
Replied by J_E_R_O_M_E on topic LanOC Gaming News 11/17/10
Very nice write up on Black Ops (BLOPS). I think you covered all the issues we have all been having. Well everyone but Danny. lol. Hoping everything gets ironed out, cause this game looks BA if it were to run to full potential. Especially with the server, we should have some great times to come.
Thanks,
JEROME
"Where ever you go, there you are"

Dreyvas wrote: You should definitely bring Goldeneye to the next LanOC for some 4-player split-screen goodness.

While were on the Bond subject, I've always wondered why we've never had a match of Goldeneye Source going at the LAN.

I second the split-screen notion as well.

Dreyvas wrote: You should definitely bring Goldeneye to the next LanOC for some 4-player split-screen goodness.

While were on the Bond subject, I've always wondered why we've never had a match of Goldeneye Source going at the LAN.

I second the split-screen notion as well.

GE: Source would also be amazing. I was in the Janus Syndicate clan when they played GE:S competitively back in alpha... nowadays they just do machinima.

We have 635 guests and one member online